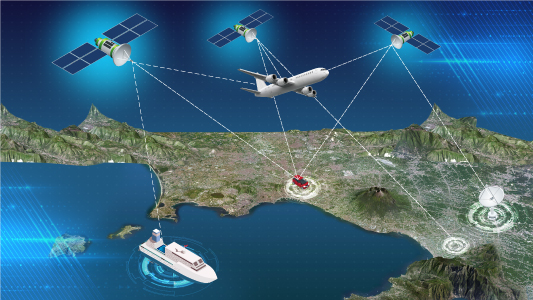 Majority of people are familiar with GPS. The Global Positioning System has probably protected you from getting lost in an unknown place as well. Often, the terms “GNSS” and “GPS” are used interchangeably but there are certain differences between the two. GPS is a type of GNSS. GNSS is a comprehensive term for any global navigation system that works utilizing satellite signals. It stands for Global Navigation Satellite System and is an umbrella name that encompasses all global satellite positioning systems. This includes constellations of satellites orbiting over the earth’s surface and continuously transmitting signals that enable users to determine their position. The 4 major worldwide GNSS Systems are – GPS (US), Galileo (EU), BeiDou (China) and GLONASS (Russia). In addition, there are many other regional navigation systems which are being developed by various countries.

GNSS helps track or guide GNSS-enabled devices such as vehicles, military systems, UAVs, missiles, etc. A GNSS System can facilitate civil protection operations in harsh environments, speed up rescue operations and help coastguard and border control authorities in navigation through unknown territories. The success of new-age security operation depends upon the ability to navigate correctly to the target locations. However, GNSS System can also be used by subversive elements to navigate UAVs to deliver explosives or to take photographs of restricted/protected areas or to control guided missiles. This necessitates the need for jamming the GNSS signals to protect important installations and to disorient the advancing forces.

The GNSS Jammer from Stratign is built to jam all the four key GNSS navigational systems by radiating interference signals. These navigation signal jammers release barrage radio-jamming and renders the navigation services inefficient or force them to exhibit undesirable error in their accuracies. As a result, the receiver can’t estimate the geographical coordinates of the object, onboard of which it is mounted. Without knowledge of its own coordinates, the combat efficiency of high-accuracy weapon decreases to the zero. Winged missiles, UAVs, and gliding bombs lose their ability to be aimed at the targets because they cannot determine their own current coordinate and consequently can’t form the guidance commands for flight.

GNSS Jammers via Stratign are used for safeguarding the area against satellite-navigated adverse threats. This navigation signal jammer will essentially protect a well-defined zone, both from the ground and the sky threats while it will not, in any way, impact the normal operations of navigation provisions on the external part of this area.

Stratign’s GNSS System has been fabricated and constructed to tackle all kinds of GNSS which are in use presently and it can block all commercial signals of the navigation systems. Being modular in construction allows flexibility of use to the customer, i.e. they can either seize all the signals together or only preferred GNSS signals.

Therefore, Stratign has an extensive range of GNSS Jammer compositions which can deliver the required type of security for both stationary locations as well as for any requirements in motion. The type of jammers and their usage can be customized according to customer’s needs and deployment foreseen. The modular nature makes the jammers very adaptable to requirements of different end-users.