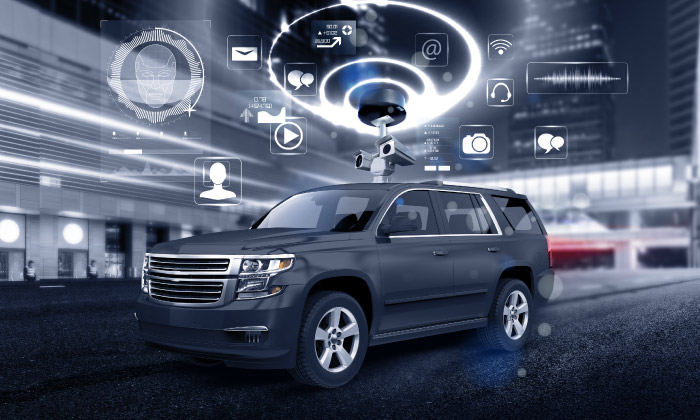 Vehicle-based surveillance has progressively become a sought-after capability, whether for urban mission support or to facilitate with crowd control initiatives. Responsiveness to security risks while on the move is vital. As a result, vehicle-mounted intelligence gathering solutions for different environments needs to have resilience towards all sorts of locations and circumstances. With the advancement of technology in the field of sensors, analysis tools and communication systems, one has many options available to be integrated into a vehicular platform. One such vehicle-based surveillance/investigation system has been designed and developed by Stratign.

In terms of the user interface, the Multi Role Tactical Investigation Unit application from Stratign is designed not only to user-friendly but also efficient. Emphasis has been laid on faster and efficient accessibility of the information. Immense care has been taken to ensure reliable and easy access of information from the intercepted database.

The system is a fusion of multiple types of communication interception systems, video cameras, video, audio and CRI analysis tools, Open Source Intelligence tools, etc. The increased data rates available in the 4G/5G networks are utilized to connect to any central database for comparison of voice or face of known criminals for faster identification of threats.

Moreover, the system displays a page that shows the analyzed data in the form of a hierarchical chart/diagram. The operator can easily get an idea of the target, about his/her previous contacted persons or numbers. The associated identifiers like IMEI, IMSI, Phone numbers and others are also available on the link analysis page.

Following are the main components of the system. It’s a system that is customizable, and where modules can be selected as per the customer requirement.

Stratign’s Multi Role Tactical Investigation Unit vehicles can be utilized to efficiently collect, combine, and process multimedia streams coming from cameras mounted on the vehicles, providing a 360° view around the vehicle. The stream is further analyzed using our Artificial Intelligence-based Facial Recognition solution to identify people captured in the video stream with the local database or the National database. All the identified faces are tagged and stored in a database with location and time stamp. The identified faces can be linked to a central database containing the facial profile of known offenders to establish their presence in an area. The proposed system provides enhanced scalability and superior flexibility versus such static setups, as well as offers advanced predictability against video surveillance with portable devices.